Having a Heart Attack?

Coughing isn't going to do it I'm afraid

I've seen emails, tweets, facebook post and even a poster in a local shop (which has since been removed), coughing will not help someone having a heart attack. The idea that coughing rhythmically when experiencing signs of impending doom will save your life, is frankly, rubbish. I saw somewhere that 'scientific evidence' shows that coughing can actually reverse the damage caused by a heart attack, really? Show me this evidence... What's that? Sorry? You can't show me? Maybe that's because there isn't any. It's just WRONG says the American Heart Association. The Resuscitation Council UK don't seem too keen on this rumour spreading either, and despite spending ages searching papers from the International Liaison Committee on Resuscitation ILCOR, I couldn't find anything there either.
Dr. Cary Fishbein, a cardiologist, hit the nail on the head “It’s right up there with voodoo as far as I’m concerned”me too Doc.

So what should you do? 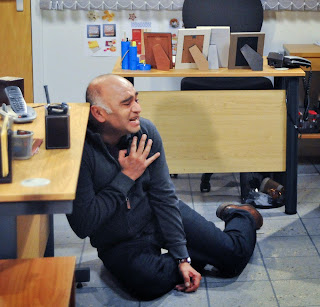 Learn how to recognise the signs and symptoms, learn what you should do, and shouldn't. (Coughing falls in to the later category) There are people out there who have already written LOADS on heart attacks, sudden cardiac arrest, angina, etc so I'm not going to, not here anyway. Check this out instead. https://www.bhf.org.uk/heart-health/conditions/heart-attack

Of course, the other thing people need to do (Debbie) is stop believing things on facebook pages, unless of course it comes from a reliable source, such as The British Heart Foundation, The Resuscitation Council, Beyond First Aid, to name a few.
AND, stop posting things on my page, (Kath). In-laws, who'd have 'em?
Stop this coughing nonsense, and go and learn what you should REALLY do. Learn how to use a defib, find out where your nearest one is. St John Ambulance have a great app. (yes, there's even an app for that). Download it, or better still get in touch, and I'll teach you what to do. Then you'll know that what you've been taught follows the guidance of Resus. Councils, Heart Associations across the World, people who actually know what they're talking about. We'll teach you to do things the way the ambulance service would want you to do things. After all, it's more than likely them who'll be taking over where you leave off, and you'd want to look good. Joking aside, if it's one of your loved ones having a bad day, wouldn't you want to know that they were getting the best possible treatment, as soon as possible, from someone who actually cares, YOU!

www.beyondfirstaid.co.uk
Steve
Someone else who cares.