Great weekend for the Beyond First Aid crew, with two of us working for care homes and their customers on Saturday morning, then I was off to Wellington College in Crowthorne in the afternoon as team medic for the Rugby. Then after a great evening spent with some of the family, it was up early and off to Dinton Pastures to cover an event. Three of us attended the Dinton Duathlon which was a well organised and highly successful event run by Barnes Fitness. I left my two first aiders where the competitors would be mounting and dismounting their bikes, and I drove off to see what perils the course would throw at them. I didn't need to wait for long as within minutes there was a pile of cyclists lying in the road, almost on top of Gareth Jones, the photographer for the event. Luckily not a single rider was injured enough to make them pull out, and Gareth got some great action shots like the one below. 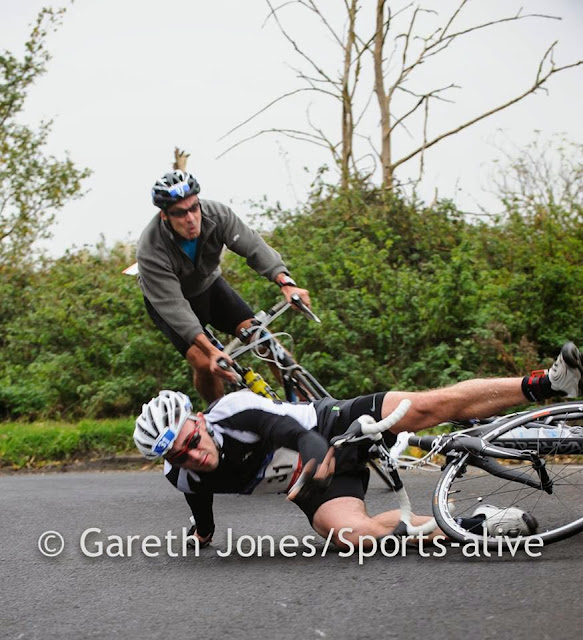 A quick check to make sure nothing was broken, medically or mechanically, and off they went. I believe one guy even went on to get a personal best time. Much respect!

I let my crew at the finish line know to expect some road rash victims after the race, which they dealt with in the only way my staff know how, professionally. I don't employ people who only have a First Aid at Work certificate (though all of my staff do have this). The thing is, that is a minimum requirement for any first aider, and I don't do 'minimum' I'm afraid. Although we offer a first aid service, and you get what you asked for, I want to be able to leave my guys alone and know that no matter what gets thrown at them, they'll cope and not panic. That's why the 2 people you may have seen on Sunday morning were wearing 'First Aid' on their hi-vis, but one is a resuscitation officer for Buckinghamshire and the other has experience in Accident and Emergency departments and I'll soon be calling her Doctor!

Anyway, enough of that, where was I? Oh yes, Road Rash!

Should you be unfortunate enough to find yourself sliding along tarmac at 40kph, there are a few things that you need to know. Firstly, it's going to smart a bit. Probably won't kill you but you'll be reminded of your mishap every time you nudge the 'rash' for the next few days to say the least.
So what should you do?
At the time, adrenaline is flowing, there is a race that needs finishing and the pain will not hit you straight away. But by the time you get home, those exposed nerve endings are going to be telling you 'something ain't right.' This is why you should keep a basic kit at home for such occasions. "Why at home, shouldn't I keep this stuff with me?" Well, if you want, but most events should have first aid about, use their kit, it's free! Road Rash doesn't usually kill you, not straight away anyway. So if you're up to it, get to the finish line and get first aid. If you have a 'rash' bigger than the palm of your hand, they may send you to A+E, but this depends on how deep it is.
That bit of road you fell on, maybe was not the cleanest thing in the world. Bits of cars all over it, rubber usually being the thing that made you fall off in the first place. Chemicals, animal poop, chewing gum, I won't go on but you get the idea!
So after the first aider checks that your head, neck and limbs are OK, then they'll worry about your skin. Infection is the biggest concern for this type of injury. They may use pressure to clean the area. Not a car jet wash but a much more civilised, saline and syringe mix, squirting saline under pressure to get rid of bits of road. Severe cases like one I treated during a stint in A+E may need Entonox and a nail brush. Ouch! Don't panic I didn't scrub it, more of a gentle 'flick' to get rid of bits that had a good hold of the skin. Then clean again with a sterile solution, wipes and pat it dry. Avoid magic potions and gels as they cause more trouble than they're worth.
Next step is to cover the rash with a non-adherent dressing. This should stay in place during the day and be taken off at night to help the scab dry up. After the scab has formed, that's your cue to say no germs are getting in. Now it can be left open to the air. Job done!

BUT... if you notice any redness around the rash, if the pain gets worse, you see any pus oozing from it or it starts to get a bit 'whiffy' then go and see your GP as these are signs of infection, and you may need antibiotics.

Finally, I hope you'll never need it, but Beyond First Aid can supply you with all the kit you need should you ever find the road rushing up to meet you.