Now call me old fashioned, but when I went to school, it was A B C D etc... So surely I can be forgiven for getting in a bit of a tizz lately. Now your regular alphabet hasn't changed much I know, but when I learnt first aid (many moons ago) it was all B's. Breathing, Bleeding, Breaks and Burns. Then when I started to teach the stuff it had morphed into the ABC version with A for Airway, B for Breathing, C for Circulation. Made sense I guess, and still does if you're at a fairly basic level of first aid.
But now we take it up a notch, things get a bit silly. First the Doctor gets in on the act. Or DRS to be more precise. D for Danger, to yourself, bystanders, and finally the poor old injured or sick. The R is for Response. When you shout at the sick, lame or lazy, do they respond? "OPEN YOUR EYES" Nothing, not so much as a twitch. So we give the casualty a little squeeze to see if this is just a deaf guy having a nap. You decide that it is actually someone in need of some help so that's when you Shout (S) for Help! Well, you don't want to be doing this on your own do you? 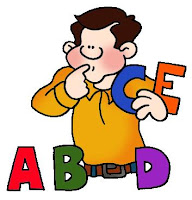 So, DRS it is, then ABC you'd think. Well, no actually it isn't. Some smart guy has screwed up the Alphabet and got way too many C's in the list.
Now it's GO DRS CAcBCDEEEEFGHI
D for Danger
R for Response
S for Shout for Help
C (the first of many) for Catastrophic Haemorrhaging
A for Airway (at last) with a little c cos you're thinking c-spine injury
B for Breathing
C (again) for Circulation D for Disability (neurological that is)
All the E's for Expose/Examine/Environment/Evacuate
That last E for Evacuate can of course be exchanged for FGHI or F***ing Get to Hospital Immediately.
Confused? Let me explain from the first C...
There are two very important things for life, air is one of them, or Oxygen or O2, and the other is blood. Blood carries the Oxygen around the body to every single cell. Without O2 bits die. When enough of your bits are dead you can safely say that you will soon follow the trend and start dropping off, you will cease to be! Bereft of life you'll rest in peace! You'll be pushing up the daisies! Your metabolic processes will be history! You'll kick the bucket, shuffle off your mortal coil, run down the curtain and join the bleedin' choir invisible!!
Sorry, got a bit of Python stuck in my Blog.
The point is, blood is meant to go round and round. If it's pouring out, then no matter what you do to the casualties airway ain't going to matter a jot, cos he or she will be dead. The good news is that all bleeding stops... eventually.
So, you've stopped the sea of claret from getting any bigger, now you need to make sure the guy has an airway, if not, do something about it. Like the blood going round and round, air needs to go in and out. This may be as simple as tilting his head back, but it may mean getting a bit invasive. I'll not go into details here, because I'm not teaching all of you to be paramedics, that's what Holby is for!
That little 'c' can be quite a big thing. As if Mr Casualty has a broken neck (c-spine) you don't want to be wriggling him around much, if at all. So you make sure he has an airway (A) and it's working (B) make sure he's breathing!
It's C time again! Circulation, he needs to have that blood that you stopped leaking out, going round, so if he has no pulse, give him a pulse. It's called Cardio Pulmonary Resuscitation or CPR, it has nothing to do with the Canadian Pacific Railway, trust me!
Here's a little tip. If Mr Horizontal has an airway but nothing is going in and out, chances are he won't have a pulse either, so start bouncing up and down on his ribs. If the mood takes you, after every 30 bounces, stick a couple of breaths into the guy. If you don't want to because he is covered in sick, blood, last night's curry or all of the above. Or maybe you can't because half of his face is missing, that's fine. You don't have to blow into him, but it helps if you can. Keep this up until the men from the Big Yellow Taxi Company show up... you did shout for Help didn't you? They can sort out the D and the EEEE's and the FGHI bits. You can then rest safe in the knowledge that you may have just saved a life, Simply by knowing that ABCDEFG is now GO DRS CAcBCDEEEEFGHI.
Oops! Silly me, I didn't say what the G and the O were for at the start.
GO for Gloves On. Well, I'm not touching the casualty, don't know where he's been!

If you think after reading my light hearted words above, "I can do that!" Good, I'm glad. BUT... Reading this is no substitute for good first aid training with a qualified trainer. If it's just Basic Life Support you want (see above) or maybe you work with kids and need a paediatric first aid course, I can help. If you're planning on crossing some massive ice sheet heading South, or maybe a sand bit in North Africa, I can advise you on what training and medical kit you'll need. In fact, even if you're going on an 'all-inclusive' to somewhere exotic, I may still be able to assist you. Do you know how clean the hospitals are in Goa for example?

Go on, give Beyond First Aid a call

One last thing. If you're thinking of hiring the Big Yellow Taxi Company, Don't! Unless it's an emergency of course! 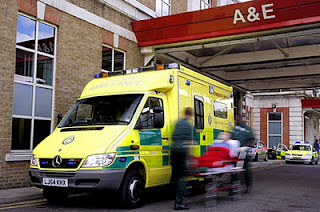