Blimey that was strange!

Last few days I've been spring cleaning the computer. Saving photos to disk, getting rid of old films and music, usual stuff that just takes up space. I was looking back at some photos of a trip to Nepal back in 2007. I did smile at the one of us sleeping on the floor in Kathmandu airport waiting for the cloud to lift. Then there's the one of me almost crapping my pants when the Yeti Airlines twin otter fell out of the sky. Luckily, it was high enough at the time to avoid flying into the Himalayas, just.

I actually remember looking at my Páramo jacket in the photos and saying, "That thing's never 4 years old?" I still wear that jacket in winter, or if I'm off on one of my mountain adventures, or even if I'm walking the dogs and its raining, snowing or there is the smallest chance of any other earthbound stuff coming my way from the heavens. Then today, like some strange message from above, I get an email from Páramo marketing. Spooky!

She says in her mail that someone has replied to an article I wrote about that very jacket back in 2007 (rapid response is after all, my job). In the article I mention Everest and Annapurna. Now the smarty-pants who replied says, quite rightly, that these are two completely different areas in Nepal. It would be like writing about sailing on the Norfolk Broads while taking pictures of Ben Nevis. So as a good citizen of the world of Blogs, I'm here today to explain.

Right, here goes. Back in 2007 I won a couple of free trips to Everest Base Camp. Mrs Blethyn (the boss) refuses point blank to go anyway beyond Heathrow if there's a mountain or a jungle, or a glacier or any big white wild animals that may want us for lunch. Adventure is my baby and she married me not it! To Ginny, adventure is going to Marks and Sparks for a change from the usual Asda trip. So I took our eldest, Martin. Now being a free trip, we were not going in peak season, not a problem. After all if it's easy it isn't a challenge. But... we spent 4 days sleeping on the floor at the airport in Kathmandu because of the weather. Finally someone says, "sod this, lets go to Annapurna instead” so we got on a flight to Pokhara and the next day headed for the hills. To say it rained is a slight understatement.

Anyway, I'll let the photos do the talking, I just hope this has made it quite clear why I was talking about Everest and Annapurna in the same breath. It will also demonstrate, quite well I think, that you shouldn't always pack what the tour company says to pack. "You shouldn't need heavy waterproofs" get lost tour company, who shall remain nameless, and yes it was me who laughed at you at the Outdoor Show this year when you asked if I'd be interested in travelling with you. No, I wouldn't thanks. It was actually this trip that made me start 'Beyond First Aid' the reasons why will be saved for a later blog, maybe. But it was also this trip that made me a life long fan of Páramo. I do apologise to Páramo for not saying "hi" at the Outdoor Show, but Ben Fogle wouldn't shut up. :o)

Paul Sleeping on the floor at Kathmandu 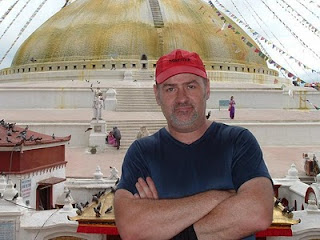 Me by a stupa, Kathmandu. (in a Páramo base layer) 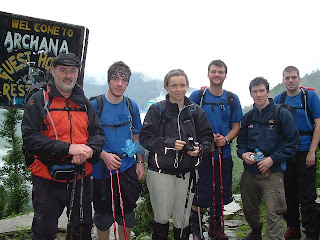 Spot the dry one, that's me in my Páramo jacket 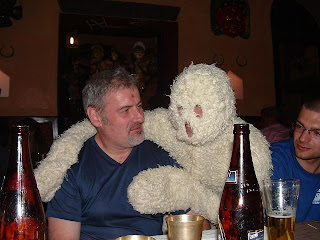 Annapurna + Rain = Leeches
The views and opinions in this blog are mine and not in any way shape or form connected to Páramo, Yeti Airlines or the Archana Guest House in Nepal.
But you have my number Fiona ;o)
Email Post