"What's your logo all about?" a friend asked me the other night,
"What bit?" I asked,
"All of it!" he said.
So I told him, and after about thirty minutes he started loosing the will to live and wished he had never asked. So to avoid such a potential disaster every happening again, I'll explain.

This is the point where mountaineers, wilderness medics, WEMT's, Adventure type's and Explorers etc may want to hit 'Back' or go and make a cup of coffee or just leave the room. This is because, like all questions, it's easy if you know the answer, but if you don't, then you face the possibility of Anne Robinson telling you that you're the weakest link and saying "Goodbye".

Right where to start? I'm a mountaineer, so I think this bit should be fairly self clarifying. It's mountains, need I say more. But there's more to them than people first see. The colour for example. Not just a colour chosen randomly, but the green is the same as the set of scrubs I once wore and also very similar to the set of NHS Pyjamas worn by this man, during his stay in The Royal Berks.

But a set of green mountains doesn't really say much about me does it, other than "This guy likes green mountains" But, this guy is also a Community First Responder, and may just end up on someones door step before the Ambulance gets there, carrying a Defibrilator (among other things). For this reason the snow line on my little green mountains has a Sinus Rhythm built in, see it? Good!
Now, what's the big blue thing? The Star of Life! A six pointed star outlined with a white border which features the Rod of Asclepius in the center, not to be confused with Caduceus 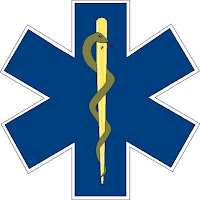 The six branches of the star are symbols of the six main tasks executed by rescuers all through the emergency chain:
Detection – The first rescuers on the scene.
Reporting – The call for professional help is made.
Response – The first rescuers provide first aid.
On scene care – The Emergency personnel arrive and provide care on-scene.
Care in Transit – The Emergency crew proceed to transfer the patient to a hospital.
Transfer to Definitive care – Appropriate specialized care is provided at the hospital.

The Rod od Asclepius is, slightly different from the original, as the eagle-eyed among you may have noticed. What used to look like the image on the left, by the magic of 'cut and paste and fiddle with it' now looks like the one one the right. Clever eh! I've changed the staff into an ice-axe, a piece of personal protective equipment used by the likes of me when on the white parts of the green things I told you about earlier. It's always better to try and avoid needing medical personnel in the first place so if your going on mountains, and there's snow about, learn how to use one.

So that's about it really, mountains, the star of life (with a serpant wrapped around an Ice-Axe) and me. That, in case you didn't know, is the 'Steve' bit. I like it, that's why I got my mate 'Pat Pending', to copyright it. This takes a while so Pat put his name on it to stop other people copying it and saying "Look what I did!" cos they didn't, I did and here it is in all it's glory. Good eh!